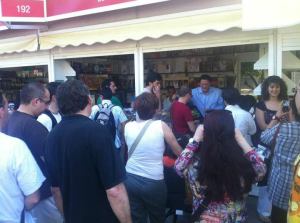 I began writing in 2010 by chance: surfing in the Internet I found a program called Scrivener. I tried the demo and I liked it so much that I bought it inmediately. And I began to write a novel because I wanted to learn to use it. Some months later I had a first draft with more than 100.000 words. Sadly it was rejected by publishers, so I gave it for free in the Internet, and it got more than 42.000 downloads in four months! Then everything changed.

‘Realidad Aumentada‘ (Augmented Reality) became a bestseller in the very first moment it was released by Ediciones B, one of the most important publishers in Spain, in february of 2012. A few months later it was launched in paperback, and in september it was launched in Mexico, a very important country in the story.

My second novel, ‘Holocausto Manhattan‘, will be available on 8th May 2013, also with Ediciones B. It will be a thriller in NY during 11th of September of 2010, but with a historical bakcground… in Auswchwitz in 1944.